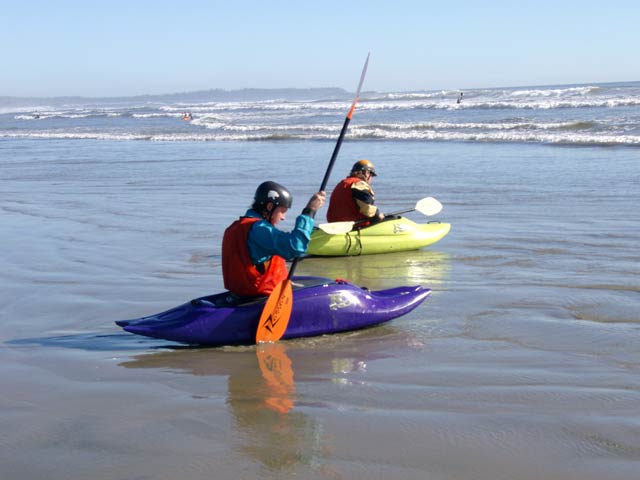 Living on Vancouver Island definitely has its advantages. Not only are there cool rivers to paddle around, but you can also catch a wave in the surf. Last weekend a lot of the islands white water enthusiasts met in Long Beach in the beautiful Pacific Rim National Park a few hours drive from Victoria up north on the west coast.

I finally had the opportunity to meet some of the the people I have been in contact with during the last months. I joined the VIWPS and got in contact with many people via email ending up setting up the Vancouver Island Paddling mailinglist VI-Paddling, which you are welcome to join.

After helping with the set up for the festival and carrying our own stuff down to the beach we joined the spectacle watching more and more paddlers hit the water. I have never seen that many kayakers in the surf at once. It must have been quiote intimidating for the surfer although they are clearly faster and more manouverable on the wave. But fun is to be had by all of us (including people that surf, kayak and boogie board like me…). Heat after heat the competitors showed off their skills, caught some waves and did some amazing stunts.

It was time for us to get wet to and Werner scored a Riot Turbo from Shayne for a test ride. So we took our boats and headed out to get wet too. The surf wasn’t any spectaular, but it was enough to have fun and muck around. After a bit of a warm up it was time to go to the beach and find out about our heats. Soon enough it was time for Werner to have a go. Any he did well. He did his blunts, back blunts, spins, California roll trials and so on. He scored the highest points up to that point in the competition in a mens class. We got some good video footage too and of course Werner was very happy, when he found out after a tiring 20 minutes in the surf. So the pressure was on me. My heat was not until 2 hours later but somehow I managed to win my heat too. I was especially happy to pull off one surf with 2 green wave spins on the same wave and a continued run. I love it when a run flows…

I was pumped. We both made it to the finals in the sports class and it was going to take place now. I had barely crawled out of the water and had to get back into the surf again. I did my best out there, but I was clearly not trained enough to hit it hard. That should tell me something right? Hahaha. Anyway. I ended up just loosing out to Werner and becoming 5th and last in the final. I was probably happier than the winners ;-)

The evening had a pasta dinner, slide show, equipment auction and live band installed and we had a great evening finishing off with baileys, marshmellows, beer and chips at the camp fire under a stary sky. What a day.

Sunday had the weather changed to foggy and cold all over the beach. That didnt distract the competition though. The surf was still okay and there was plenty to do on the beach. After the masters and the beginners action everything was over. Nearly anyway. It was already afternoon and everybody was looking forward to the price give away. With a bit of luck I scored a new paddle for Yen and a Riot. Fair enough. I have been paddling Riot boats since the Hammer came out after all.

Finally it was time to make our way home. I showed Werner the Kennedy River on the way home and after a few hours we arrived back in Victoria. Only to be hyped up about meeting lots of new friends and looking forward to higher river levels and more surf down south around Jordan River. Check out some of the photos we took in our related gallery and be sure to come up next year.

Thanks to everybody who helped organising and had some fun with us on the weekend.