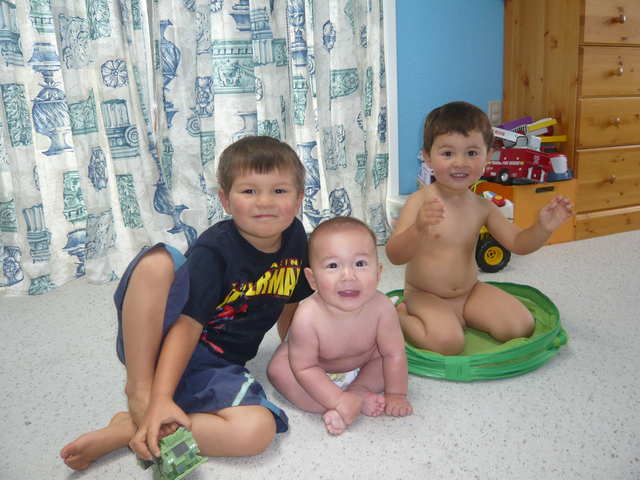 Summer of 2009 forced me to write this blog post. There never was or will be a job busier than being a full-time mum of three boys under four years. Yes,  it is crazy to think that someone with a physics degree like me would ever embark on such an experiment, when even a Monte Carlo simulation could not predict the behaviour of my boys from day to day.

So how does one cope with the demands of such a job ?

Well firstly don’t stay home too often. Kids tend to misbehave more when they are not in the public eye. Outings to the beach to dig in the sand and building sand castles are great in summer. If this proves to be too boring after a while, go find some baby crabs under rocks, make the boys stick their fingers into some sea anemones, and if all fails catch some baby fish and perform a small sacrifice. I am sure a few baby crabs and fish sacrifices will be forgiven for the sanity of a mother.  If local wilderness activities were not a challenge enough why not take the kids to the Big Apple and tackle the subway challenge. I can assure you that the club for mothers of three under four of NYC has it a lot tougher then me.

If you intend to stay at home make sure there is plenty of entertainment indoors and outdoors. And with entertainment I don’t mean the TV or computer!!! Summer is too short in BC, Canada so should not be wasted. Join your local toy library, why waste hard earned money to buy toys, that will only be played with for a week or two then sit around the house collecting dust and taking up valuable real estate. Not to mention they are a real bed-hopping traffic hazard.

As for sleep it is non-existant at this point,  so don’t ponder on how many hours of sleep you can get, but try to for the world record of bed-hopping from one kid to the next in one night. If this proves to be to easy draw a book of all the breastfeeding positions that you can think of. Whether it is feeding while you are pushing the swing, walking, collecting sea water to make the sand wet for castle building, train surfing or cooking – you got to feed, when you gotta feed. There is no such thing as boob privacy.

In all the craziness and adventures, one last parameter was never added into my simulation. Manfred, who has had long hair for nearly two decades, went to visit the barber one morning and came home to declare that his hair had vanished as is our summer.

I am now running my next simulation to find out how I am going to cope with the upcoming indoor season. But I have a feeling that all simulation will lead to dial-a-nanny 911. In anticipation I have hired a nanny to help out for the next two years. I just like to pay my respect to all mums from the three under four club who are/were taking up the challenge all on their own.

Proud to be dad