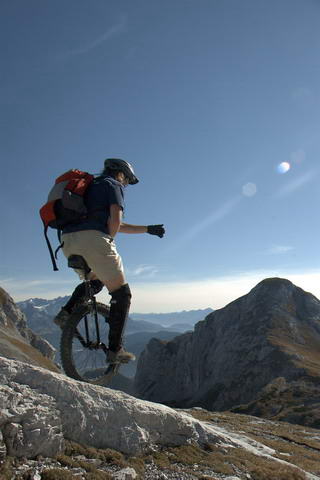 The Crossing of the Tennengebirge on one wheel

You can either read the hole story or you are lazy and just watch the picture.

The Tennengebirge – a mountain range in Salzburg, Austria – always had a special appeal to me. But due to my non-hiking ability I just enjoyed it from the valley. But things started to change in 2003, when I started to mountain
unicycle (MUni). During the summer of 2004 the idea stroke my head to try a Tennengebirgs-crossing with the Muni. People told me that I can’t ride there and that I’m crazy – which pushed me even more to do it. But the summer passed by and I didn’t try it. This year Babsi and I definitly wanted to do the crossing, but the summer was marked by rain and even more rain. Eventually I got a little bit grumbly, because I thought that I couldn’t do it this year …

But then autum turned out to be perfect and on Friday, the 14th I checked the sleeping opportunity and Michi agreed to drive us to Werfenweng – the starting point of our tour (961m). We shouldered our backpacks at 8:00 and ascended the mountain. After one hour we got to the Hackl-Hütte, where we met the first – astonished – people. We heard questions like „What do you do with a unicycle on a mountain?“ but the people where all really positivly interested and they even gave us some hints for beautiful photo options.

Our uphill continued, with a short breakfast break, up to the Tauernscharte. There, at 2108m, it was time to get dressed for riding. I took the shin protectors, closed the helmet and slipped in my gloves – and started some high alpine municycling. The plateau of the mountain range turned out to be quite challenging, but I found some really cool lines. The tour via the Schubbühel to the highest point of the tour, the Bleikogel, was marked by carrying, pushing and riding my municycle.

But I was just happy – my dream of crossing the Tennengebirge had became a reality! Sometimes I even had to encourage Babsi, because she didn’t have the rush of good vibes I had – I was stocked for the hole day!

After the cool riding (and the carrying…) at the plateau we arrived at the Bleikogel in 2411m and I tought that it was time for a downhill to the Laufner Hütte, our sleeping point. Everthing started good – the loose rocks turned out to be rideable and I was really looking forward to the downhill. But then we arrived in the Fritzerkessel and the path wasn’t a path anymore. We had to scramble from one rock to the other – no way of municycling. Exhausted but happy we arrived at the Laufener Hütte where we enjoyed a super delicious Radler (a mixture of beer and lemonade) in the last sun rays. Slowly the sun set and we prepared our dinner – marrocan style couscous. After some time, we hopped in our sleeping bags and enjoyed the sleep.

The next day started rather cold – temperatues just a little bit above zero and frost outside. Around 9:00, after 2 pots of hot tea, we started our descend to Abtenau. The path was partly rideable – partly not … But again I was justed stoked from the landscape and the short opportunities of riding. Finally we came to the forest where treetrunks waited for some serious trials. I used my remaining power to clear some cool lines until we reached Abtenau at 12:00.

After a rest with filled pancakes we tried to get a lift back home. But somehow the people either had no place left in the car or they justed looked away …. we had a lot of fun with the cars passing by but finally we had to take the bus to
get back home.

Overall – was it worth the trip?
Yeah – definitly. I had the chance to see this astonishing landscape, ride on really challenging terrain, meet only nice people and just enjoy two perfect days with my girlfriend Babsi. And additionally I know that multiday trips are easily possible with the municycle – we already started to think about a similar tour in the dolomites in southern tyrol ….