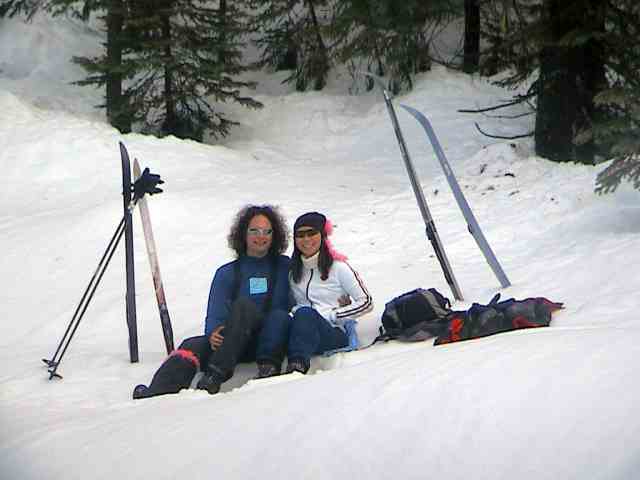 We started the snowboarding season with an awesome weekend up on Mount Washington in early January. It was snowing in Victoria and all the way up there. The drive was a nightmare and took about 5 hours, but we got rewarded with lots of fresh powder on that day and more snow overnight leading to a sunny powder day on Sunday. Last week we were  headed for more boarding and fun in the snow together with a great bunch of friends from last years trip to Sun Peaks. This year we were going to check out Silver Star. Read on to find out more and don’t forget to check out some of the photos.

Initially it didn’t look too good. With the Pineapple Express weather pattern
wrecking havoc with warm air and lots of rain and forcing Mt. Washington to
close for now we were not sure what to expect. As usual we started off with a
day of driving to get there. Up on the the ferry on Sunday morning and all the
way to the interior BC. In the late afternoon we arrived in Silver Star and got
into our house – Chelsea Towers.

Snowboarding till you drop

I must have been really keen to hit the slopes. Monday saw me waking up with
dreams of snowboarding early in the morning. And not just once. I got to the
slope at nine and was ready to shred. Shred hard!

And that is exactly what I did. Once I saw the mountain and had a quick glance on the map my decision was made. No time to waste. I made my way up on the Comet Six Pack Express and headed straight over to the Putnam Creek area. Via Bergerstrasse I got to the
top of the Powder Gulch Express lift. The slopes were hard packed to icy, but I was keen and went done straight down along the lift on Caliper Ridge. On one of my next rides I hooked up with a local skier and he showed me around for the
rest of the morning. We pretty much did all the runs on this side of the mountain that were actually open. The snow softened up and the runs got more and more fun.

No thought of a lunch break crossed my mind. I shredded until the lifts closed. Black diamond all day. Gotta love it. I especially loved the long moguls hill side of the Bon Diablo run. But Holy Smokes, White Elephant, Spirit Bowl and Chute 5 also ranked right up there. Once the lift closed on this side of the mountain I went for a final ride on the other side taking the Face run in. What a great day!

After a healthy breakfast and with a few sore legs Yen and myself headed for the XC rental and out onto the slopes. It was icy again and after a few meters we decided that we didn’t want to get stuck up on the top of the mountain. It was another sunny day and we started off on the Bridal Path loop around the village area. This multi use trail was a great start. Some ups and downs and all in all a lot of fun. We got the hang of breaking and accelerating and at least
some control of where we are going. Once we went around that trail we decided to
go for a longer run.

Strengthened from a bit of tea and a nice break we went on
the loop back on the Meadow Trail. We even glanced down some corners of the
black diamond Worls cup trail, but that was enough. We didn’t want to kill
ourselves off the slopes on the tight corners of that one after all. So we
continued along the Sidewinder trail and got rewarded with some great views
across the valleys below. We were up in the sun and the valley were all covered
in fog – hahaha. After lunch out there and more kilometers we got back to the
Meadow Trail and made it all the way back to the village before the rental
return time. On the way back we were looking for that last downhill run just
around the corner, but it didn’t come.

Wednesday proofed to be a very interesting day. After trying out snowboarding
when I was 17 and loving it I threw my skies away with the thought of never
downhill skiing again. And up to now I didn’t. In the recent years I followed
the evolution of downhill skiing towards the playful freestyle and the radical
carving. All that of course following snowboarding. It started to look
interesting. And this year I finally thought… oh, who cares. Let’s see if I
can still ski. So I rented twin tip freestyle skis from
Rossignol – the Scratch BC. So there I was back in the relativly hard and uncomfortable skiing boots at the start of the run not knowing what is going to happen next. I stepped and in the let it run. And it
worked. In fact everything was just fine. I could let it rip straight away. From the start along a little street like over I stopped at the first cut off down some small moguls. I looked down the hill and off I went. No problems. Wow… this is going to be interesting. It was still icy in between but I found I can just step in and carve it up. No mercy.

Two or three runs later on the blue runs and I was ready. I needed a challenge. So off I went. Over to the
black runs on the Powder Gulch Express with some friends. And they took me
along for a ride. Guess how cool it felt to just keep up and rip it with them.
It was just fun to hit it down the icy moguls with the soft snowhills. But
man… it was different for my legs. With the snowboard I was able to get down
the whole moguls section of the Bon Diablo run in one go without stopping. Not
so with the skis!! But I got down and had a ball. The rest of the day I cruised
along on all sorts of runs on the Powder Gulch Express lift with Mary and had a
blast. Getting a hang of carving on skis and ripping it up all over the place. I
even saw a Grouse while cruising along and managed to stop and check it out more. All in all .. believe it or not. Would I go to the
mountain more .. I would consider getting skis. But don’t fear. NOTHING beats
snowboarding in the powder ;-)

After another day of snowboarding on Thursday went decided to go snowshoeing on
Friday. Helene, Yen and myself headed to Sovereign Lake Nordic Resort. After getting out tickets we
started out ready for a walk in the brilliant sunshine. The snow was packed
with a tiny layer of powder on top. The tracks itself were mostly hard packed.
The tracks were specially prepared single tracks dedicated for snowshoeing.
They were winding through the woods away from the wide XC tracks. It was
awesome. We started along Sovereign Lake on the Trap Line track. Turning off on
the Hidden Meadow trail we upgraded to a blue run. Yes… believe it or not the
snowshoeing tracks are graded the same way ski runs are. Green, blue and black.
We all started to mostly walk a bit of the main track. The snow was softer and
it was more fun to walk as well. The paths were signposted very well and we
found our way easily. We went on to the Cabin Fever black run and made it all
the way to the Black Prince Cabin. A great place for a lunch – warm fireplace
in a cosy log cabin. After lunch headed back along Cabin Fever via White Rabbit
and back onto another section of Trap Line. After a final hike across the
frozen Sovereign Lake we got back to our start 4 hours after we left hiking
approximately 8 to 10 km.

Saturday had us driving back home with a stop over at the Far West factory
sale and a lunch. Late in the evening we fell to bed. We didn’t ski as much as
some (yes.. you Pete) or party as hard as others (girls.. you know who I
am talking about..) but we had a blast and look forward to
another winter trip with all our friends next year.